We need to take urgent steps to ensure that the effects of the climate crisis do not get much worse than they already are. Each year we are late to act only increases the size of the disaster that will befall humanity. Actually, the calculation is quite simple. If we want to limit global warming to 1.5℃, we can release a maximum of 420 billion tons of carbon dioxide starting today. The upper limit we can emit for the 2℃ limit is 1270 billion tons of carbon dioxide. If the emissions exceed these limits, the temperature will increase even more and the disasters we will experience will intensify and diversify.

As humanity, we emit 40 billion tons of carbon dioxide into the atmosphere every year. If we continue like this, we will exceed the 1.5℃ limit by 2033 and the 2℃ limit by 2054. In order not to exceed these limits, the first thing we have to achieve is to come to a decision together. This decision about global warming limits will determine how humanity should act in terms of greenhouse gas emissions in the near future. Let’s say we all decided not to exceed the 2℃ limit. Then we have a carbon dioxide budget of 1270 billion tons. If we are to reduce this amount to zero, we can reach the target by 2085 by reducing GHG emissions by 1.6 billion tons every year. I’m talking about a simple mathematical calculation, although it may sound a bit confusing while reading or listening. If we reduce our carbon dioxide emissions, which is 40 billion tons per year today, by 1.6 billion tons every year, we can reach the target.

I know there are all kinds of details in this account that may not suit your mind. For example, how are we going to divide these 40 billion tons according to countries, do we take today’s emissions as a basis, or do we simply divide 40 billion tons to 8 billion people and say that everyone has the right to emit 5 tons of GHGs, these are all valid questions. But if we are asking these questions, it means that we have already accepted the top decision “we need to reduce 1.6 billion tons per year”. It is the acceptance of this decision that is also important for success. We can’t get down to business without accepting the total amount of reduction for all of humanity. If every country accepts a reduction idea that fits its own purpose, as it is today, it will not be possible to reduce carbon emissions to a level that will not harm the Earth with a joint effort within this structure. 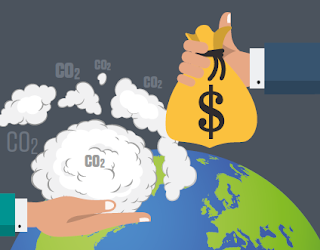 Let’s say we created a carbon market. Although this idea sounds good, for such a market to emerge, we first need to determine what our country’s share is from these 1.6 billion tons GHG reductions. Again, let’s say we accept the current situation as a basis for all countries, that is, for example, we accepted that Turkey emitted 500 million tons of greenhouse gas this year, and we determined that we have only 480 million tons of permission to emit per year. Then we’ll sit down and decide how we’re going to reduce these 20 million tons. For example, we decided that energy companies will reduce 12 million tons. Then, each company either fulfills its reduction in 2022 or buys the part that it cannot reduce from a company that succeeds more than this reduction. Even if they cannot buy this amount in Turkey, then they try to close its deficit from foreign sources because it does not matter much in which country the reduction is made.

It is not difficult to see that this system will not work. It is quite easy to understand the reasons. How will we divide 1.6 billion tons of reduction into countries? This is the main question underlying the failure of climate talks to reach a healthy conclusion today. Then, let’s say everyone agreed and we divided the reductions, how will we distribute our share within our own country? Let’s say we manage to distribute, how do we measure that everyone will comply honestly? Let’s say we were able to measure, how do we ensure that everyone is honest and those who are not honest are forced to follow the rules? Fines are not the solution here, because the fines do not catch the greenhouse gases released into the air. This list could go on for quite some time, but I think you’ve understood most of the problems. The real problem is at the top. In other words, how will we convince all countries to reduce their carbon dioxide emissions by 1.6 billion tons each year, to implement this, and to cooperate internationally in this context? Because even if one country does not participate in this system, that country will make a huge profit financially. If the country that does not want to join the system is Colombia, it will be possible to persuade with trade embargoes, but with what can you persuade China, for example?

As a result, carbon markets are a negative-sum game, as it is known in game theory. When we add up the gains and losses of all players, we get a number less than zero, which is the total cost of reducing 1.6 billion tons of carbon dioxide in the system. This game cannot be seen as a zero or even a positive-sum game. However, unfortunately, it is possible to find many enthusiastic people and companies when it comes to the idea of a carbon market, both in our country and abroad, but all of them want to be a part of this game because they do not think that a significant reduction quota will be determined at the beginning. However, if a serious reduction quota was determined, then most of the players would not be so enthusiastic to participate in this game with a serious risk of financial loss for unenthusiastic players.

This article was first published on the beforethelastglaciermelts.blogspot.com website.

This website uses cookies to improve your experience while you navigate through the website. Out of these cookies, the cookies that are categorized as necessary are stored on your browser as they are essential for the working of basic functionalities of the website. We also use third-party cookies that help us analyze and understand how you use this website. These cookies will be stored in your browser only with your consent. You also have the option to opt-out of these cookies. But opting out of some of these cookies may have an effect on your browsing experience.
Necessary Always Enabled
Necessary cookies are absolutely essential for the website to function properly. This category only includes cookies that ensures basic functionalities and security features of the website. These cookies do not store any personal information.
Non-necessary
Any cookies that may not be particularly necessary for the website to function and is used specifically to collect user personal data via analytics, ads, other embedded contents are termed as non-necessary cookies. It is mandatory to procure user consent prior to running these cookies on your website.
SAVE & ACCEPT
X